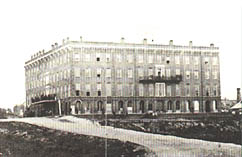 When John Patee opened his luxurious four-story brick hotel in 1858, he knew it was an innovation for its time, but little did he suspect that 134 years later it would still be attracting visitors from across the United States.

Patee built it as a hotel, a role that was not to be because of its location more than a mile from downtown St. Joseph. Yet it was a hotel three times, a girl's college twice, and finally a shirt factory for more than 80 years.

Patee House is a National Historical Landmark for having served as headquarters for the Pony Express in 1860. It was here that Pony Express operators Russell, Majors and Waddell had their main office, and it was at Patee House where Pony Express riders stayed.

During the Civil War, the Union Army took over the hotel, and Patee, who was backing the Confederacy, decided to sell the building in a nation-wide lottery. When 100 tickets came back unsold on April 28, 1865, Patee bought them himself and won back his own hotel.

It was called World's Hotel in 1882, when outlaw Jesse James was shot and killed a block up the street. The next day, the family stayed at the hotel while it served as the center of the investigation of Jesse's death.

The two things St. Joseph is known for, the start of the Pony Express and the end of Jesse James, were both directly associated with Patee House.

What Patee House is Today

Today, Patee House is a museum of communications and transportation. Visitors can stroll down the Streets of Old St. Joseph, view the dentist office of Dr. Walter Cronkite, father of the television news commentator, or operate the toy carousel and Ferris wheel in the antique toy shop.

They can climb on board the 1860 Hannibal and St. Joseph locomotive and railway mail car invented to speed the mail on the Pony Express. Or walk past the 1870 Union Star depot to the Buffalo Saloon where they can sip sarsaparilla and munch popcorn while listening to stirring marches on the saloons' Nickelodeon.

On the second floor, ladies are fascinated by more than 2,000 antique perfume bottles. For the men, there's a 1920s style service station complete with a Model T Ford, plus antique cars, trucks, fire trucks and a 1921 race car. There's also:

In the museum Blue Room, the George Warfel Westerners on Wood art collection features more than 40 life-sized portraits of famous westerners including Jesse and Frank James.