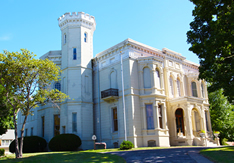 St. Joseph is known for its quantity of beautiful mansions built around the turn of the 20th century, and the Wyeth-Tootle Mansion at the corner of Eleventh and Charles Streets is a prime example.

William and Eliza Wyeth moved to St. Joseph in 1859, and William soon developed his small wholesale-retail business into the prosperous Wyeth Hardware and Manufacturing Company and Wyeth Saddle Factory. In 1879, the Wyeths hired architect E.J. Eckel to design this 43-room, Gothic style mansion with a panoramic view of the city and the Missouri River. A unique feature was the turret on the north side, which made the mansion resemble a castle. Over one million bricks were used in the construction. The front of the building was covered with native sandstone. The Wyeths decorated the interior with ornate parquet floors and walnut woodwork. The front part of the house, which has the sandstone exterior, was the family residence. The rear extension with the brick exterior housed the kitchen, pantries, and servants' quarters. The first floor, with its large rooms opening onto a central hall, was mainly used for entertaining. The second floor contained bedroom suites, and the third floor served as servant workrooms and bedrooms. The tower contained an entrance on the north side of the house and a staircase to the first floor. The Wyeths lived in their castle-home for less than ten years. In the spring of 1887, they sold the home to Mrs. Kate Tootle.

Kate Tootle was the recent widow of Milton Tootle, Sr., Milton's obituary identified him as "the builder of the prosperity of St. Joseph and the leader of its 'Golden Age.'" His business interests included mercantile establishments, the Western Bank of Missouri, and the Tootle Opera House. At his death, he had amassed the largest fortune of any individual in the city. Kate continued with many of his business interests. After purchasing the home, she hired the New York firm of Pottier and Stymus to redecorate the interior. The main hall featured a walnut paneled ceiling and an elaborately carved staircase. The parquet floors, in keeping with the style of the time, were almost entirely covered with area rugs and furniture. Two stained glass windows were added on the stairway landings. One resembled a Renaissance-style painting, and the other is of beautifully cut stained glass. The ceilings were covered with canvases of Austrian artists. Kate's son, Milton Tootle, Jr., was the next occupant of the house. He and his wife, Lillian, added a large porch to the south side and a family dining room on the southeast side. A 1932 newspaper article described Milton Tootle's home: The ceilings were painted in Europe, and the walls were lined with heavy draperies, nearly an inch thick, with elaborate handwork appliques made of materials the manufacture of which has become a lost art. And charming objects of art on every side intrigue the imagination and aid in the creation of an esthetic atmosphere.

The rooms on the first floor were the French Reception Room of black and gold woodwork, the Louis the XVI sitting room with cherubs painted on the ceiling, the library, the formal dining room, the Moorish Room with its Middle Eastern decor, and the Early American family dining room. At the rear of the first floor were the servants' dining and food preparation room, as well as a kitchen.

When Milton Tootle, Jr. died in 1946, the home became available for purchase. William Goetz, St. Joseph Museum board president, and the M.K. Goetz Brewing Company donated the money to purchase the building and the museum matched the amount to adapt the private home into a public museum. After sixty years as a museum, the first floor of the building is being restored to its Victorian grandeur and furnishings are being added. The formal dining room on the first floor is complete with Wyeth family china, furnishings, and portraits. Photographs of the home taken around 1900 are on exhibit throughout the building. The second floor features a restored Victorian bedroom and exhibits on the architecture of the famous St. Joseph architect E.J. Eckel. Eckel designed the 1879 Mansion and 75 percent of the structures in St. Joseph. Other featured exhibits include the impact of early St. Joseph businesses that had a national impact such as the Chase Candy Company, Hillyard Chemical Company, and the M.K. Goetz Brewing Company. The third floor contains exhibits on the natural history of the area.

Because of its age and historic nature, the Wyeth-Tootle Mansion has limited handicap accessibilty.

The mansion is available for rental throughout the year and is open to the public in the spring and summer months from 10 am to 4 pm on Friday and Saturday. The mansion is closed during the winter months except by appointment for groups of ten or more. Admission is charged. Please call (816) 232-8471 or email us to arrange a tour or to rent the mansion for a special occasion.