Chief of Detectives Thomas A. Johnson

Thomas A. Johnson, 50 years old, was shot by a robbery suspect named Carlos "Slippery" Henderson on the afternoon of October 26, 1921. Henderson was an ex-convict who was notorious for his escape attempts and jumped in the Missouri river on one occasion to avoid capture. Detectives Eads and Sullivan went to arrest him for suspicion of robbery. Because of his escape history, they requested assistance and Chief of Detectives Johnson, along with Detective's McAllister and Raphael, arrived at the house to surround it.

Patrolman Brinkley and Clerk Albert Hall approached one side of the house, and Officer Brinkley saw Henderson at a window. Officer Brinkley attempted to shoot Henderson but his automatic shotgun failed to fire. Henderson fired at Officer Brinkley, but the bullet struck Clerk Hall, and was instantly fatal. Chief MacDonald then ordered the house set on fire. The fire forced Henderson to the upper floor and as he stepped out onto the roof was shot to death. Chief of detectives Johnson was survived by a wife. 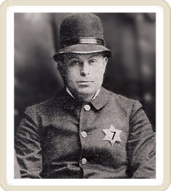